You Are Here: NEMS Sensors 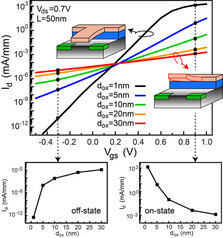 In recent years, cantilever-based nanoelectromechanical system sensors have attracted a great deal of interest as sensor platform for the realization of an artificial nose or as scales with zeptogram resolution. Scaling down the geometrical dimensions of the cantilevers allows increasing their sensing ability substantially. However, at the same time it becomes more difficult to read-out the cantilevers and the read-out signal of the sensors becomes prone to strong fluctuations and noise.

At Institute of Semiconductor Electronics we currently work towards the experimental realization of a novel read-out mechanism based upon moving gate field-effect transistors. The field-effect transistor is deliberately designed in a way that it shows strong short channel effects and exhibits an unfavorable ratio between the geometrical oxide and the depletion capacitances [1,2]. 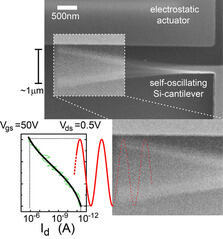 As a result, when the cantilever moves, short channel effects will be modulated leading to an exponential response of the read-out signal as a function of the position of the cantilever. As was confirmed with simulations (see figure above), the current varies by several orders of magnitude at a constant operating point, i.e. at constant gate and drain voltages. Furthermore, either an operation in the device’s off-state is chosen with an increasing ratio between on- and off-current or an operation in the on-state of the device can be employed with the main difference between being the reaction of the field-effect transistor w.r.t. a movement of the cantilever: in the case of the off-state, the current decreases when the cantilever is moved towards the channel whereas in the on-state the current increases when the cantilever (i.e. the movable gate) approaches the channel of the field-effect transistor. 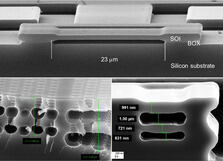 In recent years, MEMS and NEMS sensors have been integrated in an increasing number of devices such as cell phones, tablet computers etc. In particular, pressure sensors are in wide-spread use to monitor, e.g., the pressure of car tires, but are also integrated into medical devices to measure the blood pressure. While NEMS sensors have thus arrived at a rather high level of maturity, there is a need for novel, better scalable pressure sensors in order to further scale down microphones or to realize tactile sensors, for instance. In general, the ability to integrate a larger number of sensor devices with reduced dimensions and reduced power consumption onto the same chip area would be highly desirable.

We study pressure sensors fabricated based on silicon-on-insulator substrates. Using reactive ion etching, removal of the buried oxide and annealing in pure hydrogen allows fabricating pressure sensors with a crystalline silicon membrane as shown in the figure [1]. Moreover, employing an appropriate series of etch steps of a Bosch-process, double membrane pressure sensors can be realized that increase the sensitivity regarding pressure while avoiding any influence from acceleration of the sensor.