You Are Here: Neuromorphic Hardware

One of the most pressing issues of renewable energy production is an appropriate storage of the energy. At Institute of Semiconductor Electronics we work on solar-to-hydrogen conversion based on silicon solar cells. Although the minimum required voltage to drive the hydrogen and oxygen evolution is 1.23 V, overpotentials at the respective eletrodes and resistive losses yield voltages of approximately 1.6 to 1.8 V needed to split water into hydrogen and oxygen. As a result, three silicon solar cells in series are required to provide the necessary voltage. Such systems have already been demonstrated and investigated in literature yielding solar-to-hydrogen efficiencies above 10%. However, ohmic contact losses due to the connection of three cells with external wiring limit the performance of these systems. We study the realization of monolithically integrated triple-junction solar cells based on interdigitated back-contact cells. The concept is schematically shown in the figure below. The cell consists of an interdigitated back-contact cell where deep trench isolations are etched into the silicon wafer from the front side of the cell. To this end, a Bosch-deep silicon etching process known from micro-electromechancial system fabrication is employed. In our concept, the external wiring of the three cells is replaced with very short interconnects at the back side of the wafer (orange contact areas) strongly reducing the ohmic losses and minimizing the probability of failure. For further details please refer to our recent publication [1].

The cell design has some decisive advantages: First, it relies on an interdigitated back-contact cell and thus on one of the most efficient silicon solar cell concepts. Second, due to the fact that the contact electrodes for hydrogen and oxygen evolution are on the back-side of the wafer, the solar cell could be used as a lid on a vessel containing the electrolyte thus providing a very compact overall system. 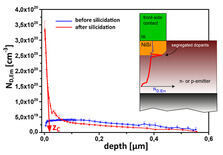 The formation of the emitter of a solar cell and its contact with a metal are crucial steps in the fabrication of a solar cell. To date, screen printing of metallic front contacts is the most widely used process. However, at a metal–silicon interface, Fermi level pinning leads to a rather large Schottky-barrier. Therefore, a high doping concentration of the emitter is required in ordert o realize low ohmic contacts of the emitter. Unfortunately, a high doping concentration also leads to substantial Auger-recombination within the emitter resulting in a substanial loss of efficiency.

At Institute of Semiconductor Electronics we investigate different techniques for contact formation known from CMOS fabrication. In particular, the use of dopant segregation during nickel silicidation to decrease contact resistances in lowly doped emitters is employed [1,2]. During silicidation, nickel-silicide diffuses into the silicon and due to the small solubility of dopants in the silicide, dopants are collected at the silicide-silicon interface. This means that the silicidation process leads to a local increase oft he dopant concentration (see figure) that lowers the contact resistance without increasing Auger-recombination. In addition, in the case of an aluminum-doped emitter, dopant segregation yields low contact resistances that allow putting the emitter in n-type solar cells at the wafer front side. This in turn yields a higher efficiency with substantially less requirements on the quality of the n-type wafer material [3]

As already mentioned above, front-side metal contacts of solar cells are traditionally realized using screen printing of aluminum paste for instance, followed by a subsequent firing step. However, when the thermal budget during cell fabrication is strongly limited, such as in heterojunction solar cells, alternative ways of making contacts are required. An attractive approach is the use of electro-plating. Currently, we are exploring the use of electro-plating for the realization of appropriate contact to solar cells. The results of the experiments are also relevant for our other research topics.